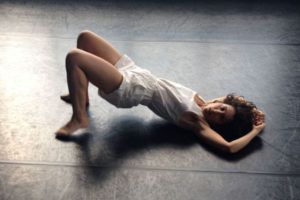 Originally from Israel and based in New York City, Netta Yerushalmy is developing a work co-commissioned by Jacob’s Pillow and New York Live Arts. Paramodernities is a series of dance experiments which explore foundational tenants of modern discourse—such as sovereignty, race, feminism, and nihilism—and include public discussions as integral parts of each installment.

Jacob’s Pillow staff member Abigail Wood sat down with Yerushalmy at the start of her residency to talk about her process.

You have already developed and performed Paramodernities #1: The Work of Dance in the Age of Sacred Lives. Are you currently working on #2?

It is a project rather than a single piece. Number one exists, and I am currently working on [numbers] two, three, and four.
I prepared Paramodernities #1 in 2013 for a festival in Berlin celebrating 100 years of Le Sacre du Printemps (The Rite of Spring), to which I contributed a duet that deals with Nijinsky’s original choreography.
The duet is the blueprint and first installment in a series of eight works that comprise Paramodernities. Each installment will be created as a complete unit on to its own: devoted to one historical dance, with a distinct creative process, involving a different constellation of dancers, and a different scholar charged with contributing a response. In addition to Sacre, I am looking at 7 to 8 canonical works in modern dance.

“This residency is a rocket ship into deep investigations, really clear focus—
the nervous system is in a different place. It is vital.”

What is that process like? How do you move from one work in the series to another?

For a while it was very clear cut, one was done and I would just restart. I go, I engage with the [Martha] Graham material, I study it, I read her biographies, I read critical theories about her work. I talk to her former dancers, I go see performances, rehearsals of the company, and I engage with the material again.

Then the same sort of thing happened when I started working with [Alvin] Ailey, this immersion. It is interesting, especially since I am learning all the material on my body even though I will not necessarily be performing all of it. It is more like a parallel study of things that are in some ways interconnected. You are trying to separate them on a cellular level. That is really artificial, because everything was influenced by what came before it and what they had practiced in their bodies and what they were going against.

It is interesting for the purpose of the project to try and separate as much as possible, because then an inquiry around what are the things we are interested in saying about the world of contemporary culture through these works emerges, rather than getting stuck in a dance history survey.

On that thought, I know that you are working with Norton Owen, our Director of Preservation, in the Jacob’s Pillow Archives. Is there anything in particular that you are hoping to gain from that research?

We have access to works here that are not online. In general I have avoided special access to archives because I really wanted to focus on what is available publically, but since we are here there are a few pieces we should be looking at.

In terms of Norton, it is like going in and marinating in this place where he knows everything, and he cares about this. The Archives feel really touching. It aligns itself so easily with the project and I just want to be there. I think he enjoys the fact that somebody is there doing that kind of research because he can provide so much.

I know you’ve done a lot of residencies in the past, all over the world. How vital are they to your work?

Really vital. It is astonishing how much can be accomplished when you have twelve hours a day to [work]. It is not just the studio time, it is the brain space to read and think. It is weird because often in residencies the days do not feel long enough even though they are infinite, because there is nothing else you are doing besides working. It is usually just like a rocket ship into deep investigations, really clear focus, and the nervous system is in a different place. There is just not as much juggling at all. It is really important.

The more removed it is [the better]. You can never recreate that.