Just launched in 2017, Vision 22’ is a five-year plan to fortify the Pillow’s existing programs and put new emphasis on three distinct goals. Goal #1 is “Strengthening the artistic core,” and that is where the creation of the Pillow Lab emerged.

The 2017-18 Pillow Lab series featured 12 customized residencies with representation of artists from around the United States including Seattle, Minneapolis, and New York, and two international companies from Cuba and Australia.

The Pillow Lab offers the opportunity to work in the Pillow’s retreat-like atmosphere and state-of-the-art studio spaces, giving artists the time and space to research and develop new work with varying levels of technical aspects and research components, including the opportunity to fund an essential “outside eye.”

Explore some highlights below with information about the work developed and an insider’s look at the artists’ time spent at the Pillow Lab: 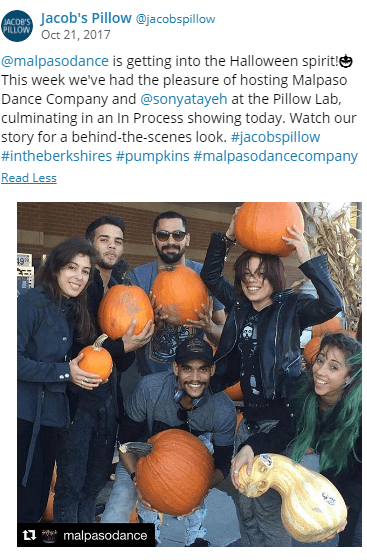 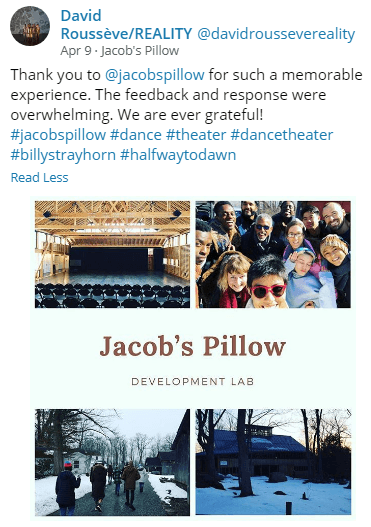 David Roussève is in development of the work Halfway to Dawn – The Strayhorn Project with his company, REALITY. This evening-length piece dives into the work of Duke Ellington’s main arranger and writing partner, Billy Strayhorn, who remains largely unknown though he co-wrote much of arguably the most important body of work in American music history in the 1940s–1960s. Redefining ‘biography’ as the intersection of fact, conjecture, comment, abstraction, and fantasy, Halfway to Dawn seeks to uncover the truth of Strayhorn’s life. Choreography interlaced with video-projected text and abstract art explores the rhythmic foundations and emotional undercurrents of the music, combining the polyrhythms of African American social dance to the rolling hips of Fosse and the sequential flow of postmodern dance. 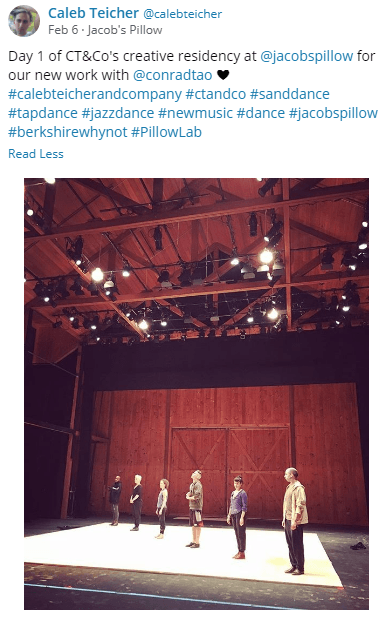 Caleb Teicher, alumnus of The School at Jacob’s Pillow and one of Dance Magazine’s “25 to Watch,” brought his company Caleb Teicher & Company (CT&Co) to develop a new, evening-length collaboration with composer Conrad Tao. Tao, regarded as “shaping the future of classical music” (New York Magazine), is a critically acclaimed pianist and composer. Known for presenting new work that blends the American dance forms of Tap, Lindy Hop, and Vernacular Jazz in a modern context, Teicher used this residency to explore the early stages of the sonic and visual potential of a stage inhabited with sand. 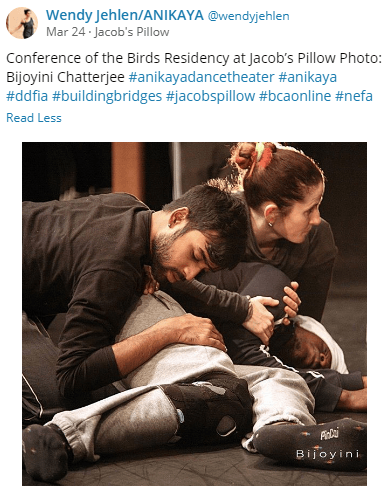 Following community workshops in Pittsfield in October and March, Wendy Jehlen developed the work Conference of the Birds. This evening-length work is inspired by the epic poem by Persian poet Farid ud-Din Attar, embodying stories gathered from modern-day refugees and other migrants. Conference of the Birds brings together international collaborators from Turkey, the United States, Brazil, Benin, Egypt, Japan, France, and India. Founder and Artistic Director of Boston-based ANIKAYA Dance Theater, Jehlen is a dancer and choreographer with a unique approach to narrative work that synthesizes music, dance, and storytelling from around the world. Conference of the Birds is supported by a Building Bridges grant from the Doris Duke Foundation for Islamic Art and a Live Arts Boston grant from The Boston Foundation.

IN PROCESS SERIES AT THE PILLOW LAB

Look inside the Pillow Lab at In Process Series showings. Invitations are offered to members at the $500 level and above or partners of the College Partnership Program.