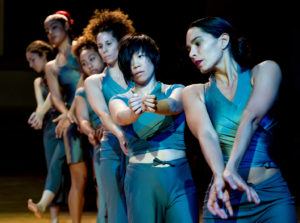 The Pillow is excited to welcome Marsha Parrilla of Danza Orgánica for a week long residency and community engagement event in Pittsfield, MA, where they will host a movement workshop and present a lecture/demonstration of Parrilla’s work Running in Stillness. Marsha sat down with Pillow staff member Abigail Wood to talk about her company and their mission.

I know this is your first time at the Pillow, and you are here in a few different capacities. What is it like being here for both a residency and to work with the community? How are both of those things important to your work?

I am really excited to be doing both because my company does social justice-oriented work and working with the community is an integral part of the work that we do. I feel like this residency fulfills both branches of our mission: artistic creations with the performers and also working directly with the community.

Could you tell me a little bit about the inspiration for Running in Stillness and what people can expect from the workshop and lecture/demonstration?

Running in Stillness was inspired in part by our mission, to dive into women’s issues.

I was approached by a friend who thought I might be interested in this podcast about incarcerated women in New York. They have musicians come and create lullabies with them; it is called The Lullaby Project. When I decided to create a piece for this I knew I would like to dive into the story. I went with it and it became not about the lullabies at all, it became stories about incarcerated women and daughters and family members of incarcerated parents. I interviewed a lot of different people. I found a collaborator in my community, called Sisters Unchained, and they exposed me to some people in their group who were formerly incarcerated, and the daughter of an incarcerated parent.

“working with the community is an integral part of the work that we do. I feel like this residency fulfills both branches of our mission.”

I interviewed them and their families and they became an integral part of the project. One of the women is in the piece. Another woman was more of a mentor and adviser -through her I developed a lot of different characters. She would come to rehearsals and say, “This is not how it happens – it happens like this.” I would ask her advice about the accuracy of the work that we were doing and she was always present at the talk-backs.

How are people impacted by the work? What has been the response?

People have been really moved and the response is usually that this is a very powerful piece. We have been working on this for two years and when we’re on stage we’re not creating/performing something that has been given to us, we’ve been building this for a very long time and the characters are embedded into the performers. That is something that shines through in the performance. Another aspect that people find special is the community member that is with us. She has a solo, she wrote a poem that is highlighted, she dances while a spoken word artist reads the poem and that is very, very touching because it is based on her own experience with her dad.

“these are human beings, they have families, when you take away one person it’s not just that one person it is a trickle affect – and we put all of that out there.”

One of the reactions that I got was from a woman who said that she would never have known that this is something that happens because it is so far removed from her reality. She was thankful that she was exposed to this issue. We talk about incarceration and how it impacts families and this population; incarcerated people are so marginalized and so ostracized, we are trained to think that they are bad people and we shouldn’t even think about them. What we do is tell you that these are human beings, they have families, and when you take away one person it’s not just that one person it is a trickle affect – and we put all of that out there, we don’t even touch upon what the person did, it’s about the impact of what that does to families.

Feb 24, 2017
Danza Orgánica, a Boston-based Contemporary Dance Theater Company directed by choreographer Marsha Parrilla, presents a lecture/demonstration performance from her work Running in Stillness, preceded by a Dance for Social Justice Movement Workshop for youth, teens, and adults of all experience levels.