Jacob’s Pillow was first settled in 1790 by the Carter family as a mountaintop farm at the crest of a steep, twisting stagecoach road between Boston and Albany, now Route 20. Local folk viewing the zigzagging road from the bottom of the hill thought it resembled the rungs of a ladder, so these biblically-minded New Englanders named the road Jacob’s Ladder. Boulders dotted the farm pastures, among them a large cushion-shaped rock behind the farmhouse. The Carter family knew well the story from the Book of Genesis, which tells of Jacob laying his head upon a rock and dreaming of a ladder to heaven. Given the stone “pillow” and the farm’s proximity to Jacob’s Ladder, the property from then on was known as “Jacob’s Pillow”.

In 1931, modern dance pioneer Ted Shawn bought the farm as an artistic retreat. At the time, Shawn and his wife, Ruth St. Denis, were America’s leading dance couple. Their Denishawn Company had popularized a revolutionary dance form rooted in theatrical and multicultural traditions rather than those of European ballet. Their trailblazing work and cross-country tours paved the way for their students to become the next generation of legendary dance pioneers: Martha Graham, Charles Weidman, Doris Humphrey, and Jack Cole. But Shawn and St. Denis had recently separated, personally and professionally, and in the fall of 1931, Shawn conducted the last rehearsals of the Denishawn era here.

Shawn had long harbored a dream of legitimizing dance in America as an honorable career for men. In 1933, he recruited eight men, including Denishawn dancer Barton Mumaw and several physical education students from Springfield College, for his new company. The tall and burly Shawn and his athletic dancers were intent on challenging the image of men in dance; they forged a new, boldly muscular style while also raising their own food and constructing buildings still in use today at the Pillow.

In July 1933, Shawn and his Men Dancers started giving public “Tea Lecture Demonstrations” to both promote their work and earn their living. The first Pillow audience of 45 curiosity-seekers expanded steadily so that by summer’s end, people were turned away: roots for what was to evolve into the Jacob’s Pillow Dance Festival were established.

From 1933 to 1940, a period Shawn termed “seven magic years”, Shawn and his Men Dancers toured throughout the United States and Canada, Cuba, and England, performing more than 1,250 times in 750 cities. All the while, they continued the summer “Tea Lecture Demonstrations” at the Pillow. Radical changes were necessitated by the Selective Service Act of 1939, although Shawn also justifiably believed that his artistic statement had been made and that it was time to end his successful crusade. In May 1940, the Men Dancers officially disbanded and most joined the armed forces.

Deeply in debt, Shawn proposed selling Jacob’s Pillow to Mary Washington Ball, a dance teacher who leased the property and produced the Berkshire Hills Dance Festival here in 1940. Shawn credited Ball for beginning the diverse programming that became the Pillow’s hallmark, but the summer was a financial disaster. Shawn rented out the Pillow again in 1941, this time to British ballet stars Alicia Markova and Anton Dolin.

Their International Dance Festival was so successful that local supporters formed the Jacob’s Pillow Dance Festival Committee, raised $50,000 to buy the property from Shawn and to build a theater (performances had been held in the barn studio), and named Shawn as director. Despite wartime hardships such as gasoline and tire rationing, audiences climbed the hill on foot and horseback to attend a wide array of programs: ballet, modern dance, mime, ballroom dance, and folk and classical dance of many cultures.

On July 9, 1942, the Ted Shawn Theatre opened its doors as the first performance space in America designed specifically for dance. Architect Joseph Franz, who also built Tanglewood’s Music Shed, had agreed with Shawn that the theater exterior and its post-and-beam construction must harmonize with the existing farmhouse and barns. Franz also created the rooftop weathervane, which depicts Barton Mumaw, Shawn’s leading dancer and partner. Inside the theater on either side of the stage are life-sized portraits of Shawn in his Hopi Indian Eagle Dance and Ruth St. Denis as Kwannon (the Japanese Goddess of Mercy), painted in 1925 by Albert Herter to commemorate two of their great roles celebrating other cultures.

Other than a yearlong sabbatical for an Australian tour in 1947, Shawn remained at the Pillow’s helm until his death at age eighty in 1972. For some time thereafter, the survival of Jacob’s Pillow seemed uncertain while many assumed it couldn’t continue without Shawn. His designated successor, John Christian, was unable to serve more than one year (1972) due to poor health. Next was dance critic Walter Terry (1973), but a huge deficit sent the Pillow’s Board of Directors searching again, and in the interim Charles Reinhart directed the Pillow in addition to the American Dance Festival (1974). A measure of stability came with the five-season tenure of Norman Walker (1975-79), who revamped and upgraded the Pillow’s educational and presentational standards.

Liz Thompson (1980-90) initiated a dramatic artistic resurgence by welcoming new artists and audiences. Her innovations, such as the popular Inside/Out presentations and open access to the grounds and studios, remain an integral part of the Pillow’s personality today, and Thompson was also the catalyst for constructing the Doris Duke Theatre.

Samuel A. Miller (1990-94), who had worked in partnership with Thompson since 1986, spearheaded a sorely needed renovation and enlargement of the Ted Shawn Theatre and the installation of Blake’s Barn.

From 1995 through 1997, Sali Ann Kriegsman led the Pillow through a difficult period, eliminating a potentially disastrous $4.8 million debt, orchestrating a range of new projects (including the still-thriving Audience Engagement Program), and ending her successful tenure with a 65th-anniversary celebration.

Ella Baff began her extraordinary 17-year tenure in 1998, eventually becoming the longest-serving director since Shawn himself. She engineered an unprecedented period of institutional growth and hard-won stability, building the organization’s first endowment and winning legions of new dance fans, both onsite and online.

The Pillow’s national status was underlined in 2000 with two noteworthy distinctions: it was included on the Dance Heritage Coalition’s list of America’s Irreplaceable Dance Treasures, and listed on the National Register of Historic Places. In 2003, the federal government named Jacob’s Pillow a National Historic Landmark for its importance in America’s culture and history, thus distinguishing the Pillow as the country’s first and only Landmark dance institution. In 2007, the Pillow was formally dedicated as a site on the Upper Housatonic Valley African American Heritage Trail, which celebrates people and places that hold pivotal roles in key national and international events of African American heritage. In 2011, President Barack Obama honored the Pillow with the National Medal of Arts, and the 80th Anniversary Festival was celebrated in 2012 with an extensive retrospective exhibition in Blake’s Barn.

In January 2016, the Jacob’s Pillow Board unanimously selected Pamela Tatge to carry on the ideals originally envisioned by Ted Shawn: to create, present, and preserve an unparalleled variety of dance forms; to educate young artists; and to engage audiences deeply and meaningfully in the great art form of dance. Now overseeing her fourth season as Executive & Artistic Director, Tatge is interacting with the Berkshire community in exciting new ways, introducing year-round programming and nurturing an expanded schedule of Pillow Lab residencies for artists, ensuring that Jacob’s Pillow will continue to evolve and thrive for decades to come.

The friendly, down-home traditions at Jacob’s Pillow, such as the ringing bell announcing that the Ted Shawn Theatre is open for seating and pre-curtain speeches, are carried over from Shawn’s day. Through careful and considered expansions and renovations of Jacob’s Pillow programs and campus, this historic site in American dance retains the rustic ambiance of “the farm”, as Shawn called it, while continuing to open new doors for dancers and audiences from around the world.

An illustrated history, A Certain Place: The Jacob's Pillow Story, authored by Norton Owen, the Pillow's Director of Preservation, is available for purchase. 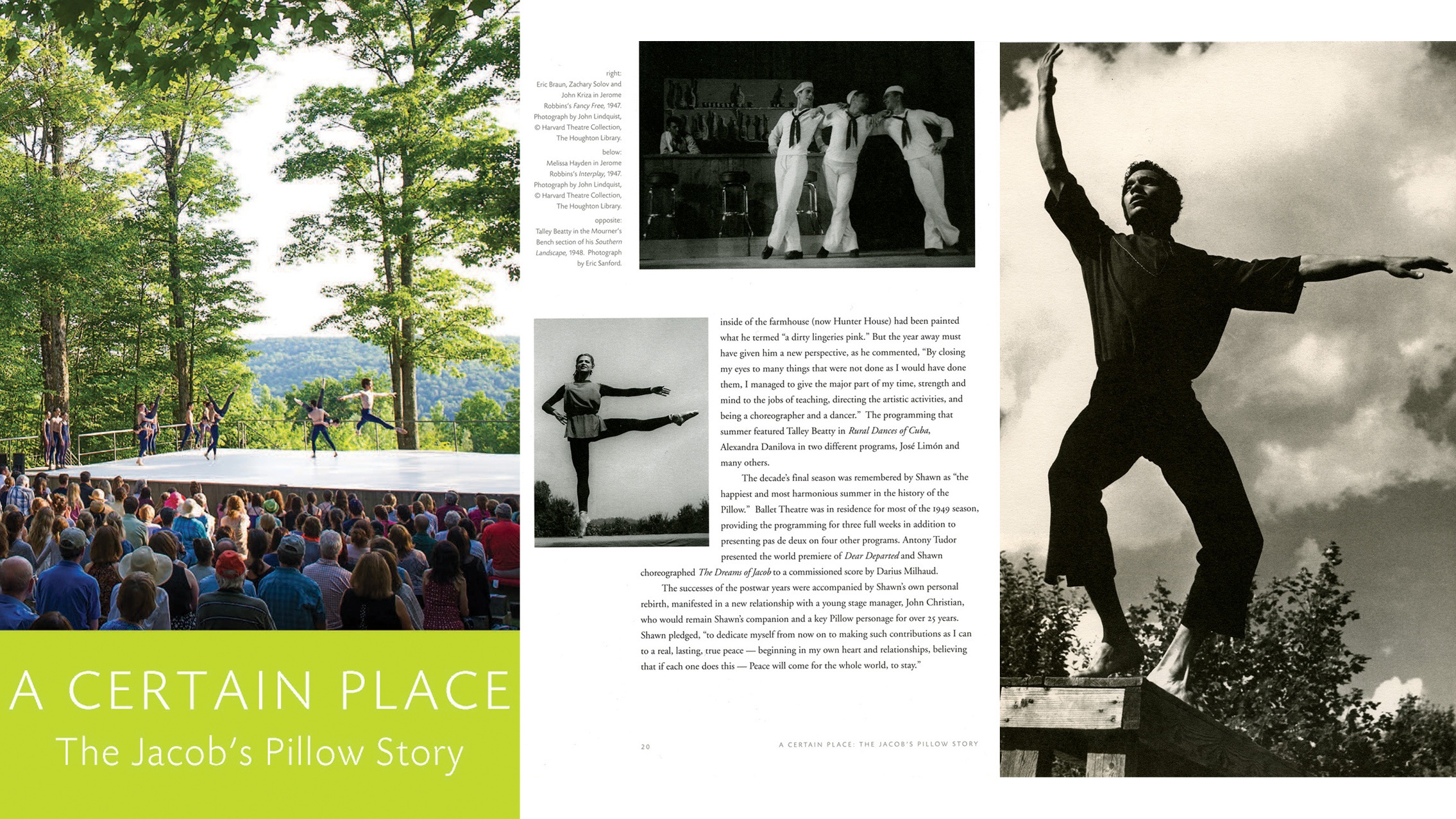